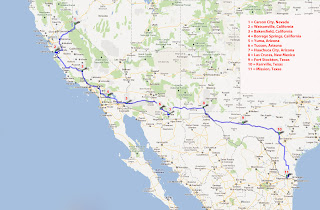 On the morning of September 19 after a few more treats for Golda and hugs with Robin we departed Carson City headed toward Watsonville, CA. A very scenic drive over the Sierra Nevada Mountains down into the Pájaro Valley of south central California (note: pájaro is Spanish for bird).
A long pull at 271 miles took us from an elevation of 4652 feet to 78 feet to the Pinto Lake Park...and much warmer temperatures. Located 95 miles south of San Francisco, Watsonville is known widely for its agriculture, mainly fruits and vegetables. Chances are you've eaten strawberries, blackberries, raspberries or artichokes produced in the fields around Watsonville.
The woman who managed the RV portion of the park told us "it will be the quietest park you've ever stayed in". Perhaps not the quietest overall since we've been in some very remote areas, but, it certainly was the quietest urban RV park setting. The Monterrey Birding Festival organizers had listed the park as a recommended place for RVer's and we could not have been more pleased. Not only was the weekly camping rate low (especially for California) but the park manager was also a birder who provided us with local info about where to find some of our target ABA life birds.
Our motives for attending the festival were multiple. First, it put us in an area of California that held a number of ABA life birds and access to locals who knew where to look. Second, it was relatively close to San Jose from where we had hoped to lure our friend Cecil Pendleton to visit us. And third, we would have an opportunity to get together with a couple, Jennifer and Peggy, we had first met while they were guests at Tandayapa Bird Lodge in Ecuador where we had been volunteer hosts earlier in 2011. Jennifer also happened to be the current chapter president of Sequoia Audubon, one of the festival's principle sponsors.
During our week's stay in Watsonville we managed to meet all our expectations and then some. Cecil did join us for an overnight at our place plus a drive to and from Pinnacles National Park east of Salinas Valley to find free-flying endangered California Condors. We not only found condors but also a flock of Yellow-billed Magpies, another California specialty.
Jennifer invited us to join her while she scouted Waddell Creek/Rancho del Oso. We were doubly pleased because by the time we had tried to sign up for one of Jennifer's festival field trips, they had already been filled.
Acting on a tip from the RV park manager we spent part of a day at the UC Santa Cruz Arboretum, a reliable spot for California Thrashers, which we had little trouble finding. That same day we bumped into the Seymour Marine Discovery Center/Long Marine Laboratory where we took a brief tour of the facility and scoped thousands of Sooty Shearwaters as they migrated along the Pacific coast. 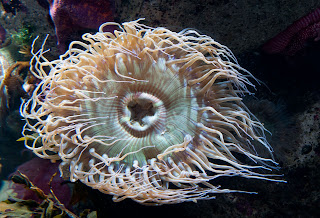 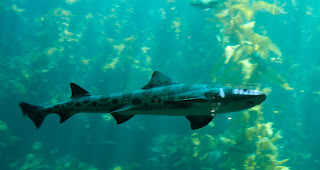 Other tips from festival goers lead us to more ABA life birds like a Surfbird for Carol. And what would a visit to Monterrey Bay be without a trip to the Monterrey Bay Aquarium? While we spent an entire day at the aquarium we still didn't manage to see everything! And as foodies, let's not forget ample opportunities to sample various area restaurants!

Another day was taken up by Tom's first pelagic trip.The tour was with Debbie Shearwater a legendary pelagic tour leader. Pelagics are seagoing birds that spend most of their lives on the ocean, coming to land only to breed. The trip wasn't terribly satisfying due to dense fog but the birds we did see we got good looks at since they had to be close to the boat to be seen at all. On the bright side we didn't get sea sick!

Toward the end of the week we started to plot out a route to Texas that would meet our desire to find more ABA life birds as well as a route that broke daily trips up into manageable daily distances. By September 27 we put Watsonville in our rear view mirrors and headed southwest toward Bakersfield, CA.
The River Run RV Park put us within reasonable striking distance of more coastal birding opportunities while we avoided towing our RV through coastal highway congestion. Cashing in on a free night's stay at a Comfort Inn in Ventura, we left our RV parked in Bakersfield and spent the day driving to the coast via Maricopa, CA, reportedly a good spot to find Le Conte's Thrashers (yes, we found them!). Following a restful night in Ventura we were only minutes away from an early morning departure of our daylong cruise (Island Packers Cruise ship) to Santa Cruz Island, part of the Channel Islands National Park.

Of course it was another bird that drew us to the island - the Island Scrub Jay, the only spot in the world where they are found. And while the cruise itself was not billed as a pelagic trip we still managed to catch an ABA life bird as a few flew in front of the ship: Parasitic Jaegers. Oh, and the scenery wasn't bad either! Unfortunately, our late afternoon/early evening return drive to Bakersfield on congested freeways was less than restful.
Leaving Bakersfield behind we set our sights on Borrego Springs, CA. Our path took us through the town of Tehachapi where we finally caught up with a mutual friend of Cecil's, Karl Schuck, at the Apple Shed for breakfast. Here was another example of having communicated on online for years and finally meeting in person! Karl is deeply entrenched with community theater and the Beekay Theater.

Anza-Borrego Desert State Park near Borrego Springs was our next spot on the map where we would park for a few days. It was another long tow as we went out of our way to avoid traffic congestion around Los Angeles but we still managed to become ensnared in multi-lane traffic. We have a new found respect for long haul truckers! Alas, as we navigated toward Borrego Springs we experienced a "misadventure" driving error that put us in an area devoid of fuel stops while we were low on fuel. After consulting (more like cursing) the GPS and with the helpful aid of a local motorist we determined the best course of action was to drop the RV along the road and drive to a nearby town up a steep grade to fuel up the truck. Thank goodness for the BigFoot leveling system which makes unhitching/hitching so convenient!

We had stayed in Borrego Springs in the 90's (motel) and recalled the state park. The location put us in good shape to visit Joshua Tree N.P. and the Salton Sea. Unfortunately, recent mud slides had blocked the southern entrance to Joshua Tree. The drive to enter via the northern entrance was too far away in the time we had allotted ourselves. But our visit to the Salton Sea provided us with another ABA lifer: Yellow-footed Gull...found after a long, hot dusty hike to a rocky overlook. And Anza-Borrego had a very nice hiking trail that lead to the third largest palm oasis in California located in a rocky canyon that provided very close encounters with desert big horn sheep. By the way, the canyon trail is best taken early in the morning before the full extent of the sun gets a chance to hit the canyon floor.
Following Borrego Springs, our next stop was to be a nearly month long revisit of Tucson which required an overnight in Yuma, AZ at the Palms RV Resort. The tow to Yuma would be our second longest pull at 318 miles.
On the afternoon of October 3 we found ourselves parked at Justin's Diamond J RV Resort outside Tucson. The location was ideal with its proximity to the Arizona-Sonoran Desert Museum and a unit of the Saguaro National Park (West Unit). Our site was backed up to 40,000 acres of public lands laced with numerous hiking trails.

For the next month we filled our time visiting our friend Nancy Novak and her friend KP who was moving to Tucson, attending various venues to listen to our guitarist friend Troy Gray, scoping out area birding hot spots, and multiple trips to the AZ-Sonoran Desert Museum ("Free Flight" blog entry from the museum). We had acquired an annual membership during our earlier visit to Tucson in April. Aside from shopping and eatery trips into Tucson we added a visit to the Pima Air and Space Museum, a day trip to tour Kitt Peak National Observatory, and of course Madera Canyon. Mark Langford, another full-time RVer we've met multiple times as our paths have intersected across the country, parked next to us for a week. And, we discovered that a couple we had met earlier while we were parked in Wall, SD, was wintering at Justin's. What a small RVing world it is!

On the morning of October 31 after nearly a month in Tucson, we packed up once more and headed toward Texas. We stopped for a few nights in Huachuca City, AZ (Tombstone Territories RV) where we squeezed in trips to the BLM's San Pedro Riparian Conservation Area and a couple of our favorite canyons on the Fort Huachuca (Sierra Vista) military post. It also gave us an opportunity to see first hand the damage inflicted from wildfires we had witnessed in during our visit in April.

In past years we had taken a route that took us south and west along the Texas/Mexico border. This time we wanted to spend a few days in Kerrville, TX to visit Tom's Godmother. That put us on a trajectory that took us through Las Cruces (Hacienda RV Resort) where we spent an afternoon walking through historic Mesilla Plaza with Gayle and Harvey Pagel, who happened to also be in Las Cruces. They're our neighbors from Bentsen Palm RV who, like us, were headed back to BPV for the winter. Then there was a morning spent at White Sands National Monument when the sands reminded us of snow! 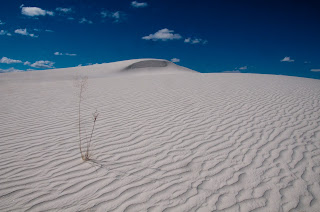 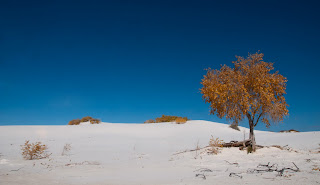 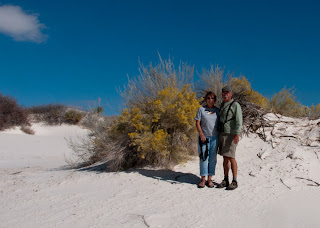 An overnight in Fort Stockton, TX (Fort Stockton RV Park) and before we knew it, we found ourselves just outside Kerrville, TX trying out a relatively new RV park (Triple T RV Resort). We made arrangements to visit Nan, Tom's Godmother, on the following afternoon. For a woman of 89 years, Nan has near perfect vision without the aid of eyeglasses and she takes no medications. However, her mental state had visibly worsened and her care givers were concerned that Nan would not be able to continue to live independently. We expect Nan to be moved to a nursing home before our next visit. 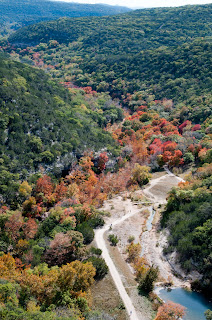 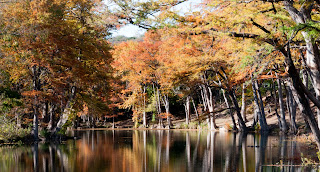 During the rest of our stay in Kerrville we added a road trip to Fredericksburg and some Hill Country wineries, and the Lost Maples State Natural Area to try for some fall colors. But by November 15 we loaded up and headed for Bentsen Palm Village RV Resort. After our longest day on the road (322 miles) we pulled into BPV and were safely parked on our winter site by late afternoon. It would be good to sit still (well, not be towing) after another event filled year of full-timing!

Tom and Carol Sykes
Appleton, WI, United States
A self-taught artist and photographer, Tom retired from Lawrence University, Appleton, Wisconsin in 2009 where he worked as the Director of Media Services for 25 years. He is the owner and co-founder of the Wisconsin Birding Network. He is a founding member of the Vietnam Dog Handler Association and was a Scout Dog handler in Vietnam in 1968. Carol is the former Executive Secretary and lobbyist for the Madison Audubon Chapter. She is retired from her seasonal job at Schmalz Country Gardens in Appleton. Prior to that she has held a number of interesting jobs not the least of which was the on-site guest liaison of a small resort in Jamaica.

Birds of a Feather

The States of our Migration 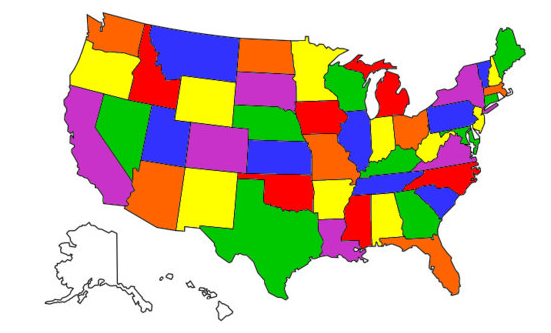